Last week I got myself a C64 breadbin and a 1702 monitor. Tested both at the seller’s location. First time we powered the C64 on there were some weird colored characters and artifacts in a vertical line on the left side of the screen. They disappeared after a few seconds. Directly after turning it on again, the C64 was working perfectly. I tested if further at home, and again after first time turning it on, the artifacts appeared…and after 10 seconds they disappeared again. Weird. Tested the power supply, switched the monitor with another one, and connected a good C64 to the new monitor. Nada, seems the C64 was sick! Opened the casing to find out it was repaired before, at least the 12v regulator was replaced in the past with a new one. 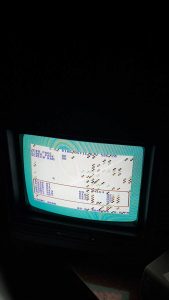 Tested the power switch, reseated the VIC-II, with no luck. Expected that the issue might be capacitor related, since the issue just faded away after a short time. Loaded a game, played a game and everything ok. In the end replaced the VIC-II chip for a known good one…and the issue was solved.

Another 6569r3 chip for the dustbin, and another C64 ready for auction on Marktplaats.

This entry was posted in My Collection, Repairs and tagged 250407. Bookmark the permalink.