Commodore, not the 64G or the Aldi

Kinda annoyed. Opened the C64. Led replaced with a new one, lots of glue, PLA replaced with an eprom or alternative one, everything heatsinked in a bad way.

But definitely not an Aldi, did some reading over what to expect in a C64 Aldi. The stupid thing is, if it is an Aldi, they were made in the US for the German market, therefor at least the serial label on the bottom should mention that. I should have informed myself better before bidding!

Guess, although working, it’s value is absolutely not the 75 I paid for it. And damn sure the seller knew that as well, although  i was discussing with him if it was an Aldi. Guess I was just too eager, and didn’t inform myself before going there. Problem is, if it was an Aldi, you just need to be quick, make a deal before others noticing the auction…and then you are kind a stuck to it.

Will keep my eye on that seller. He sold most of his ‘personal’ collection, not quit sure what he meant by that..if this was one of the better Commodore he had..We’ll see what comes up next under his account. He even put a ‘new’ seal on one of the screws on the bottom (update: very active on Marktplaats with weekly offering (repaired) Commodore related stuff)

A bit of a disappointment I think….it’s ether a normal breadbox, with upper half taken from an Aldi or a G. Slight mismatch in yellowing between upper half and lower half. Will check the board tomorrow, underneath is says C64. The guy has sold much of his collection the last months he told me, including an SX. In the middle of the battle of ending his relationship he decided he would sell the lot…at least his ex cannot take half of it and throw it away. Weird story. Ah well.

On the way back home, went to Groesbeek. Pick of two joysticks, Quickshot VII and a Quickshot Turbo II for 15 euro. Elder guy, made a flee market of his garage, selling all kinds of stuff. Had his own business in video productions and planned to go on retirement. Nice guy.

And upon arriving home the package arrived form Lenz…a outstanding 64G. A warm welcome to my collection.

In both auctions, this one, and the one from Lenz, somebody was just too late, and offered 100-120 euro for these Commodores…desperate trying to break the agreement I had. Both sellers kept their word.

Pick up tomorrow, a very nice one, from a collector in Wijchen, bought for 75 euro. Heatsinks installed. I probably will keep the best looking of the two I just got. Or keep the boxed one in store, and just use the other one for daily use, next to the 64c. I do have two 1702 monitors, will look good in my study 🙂 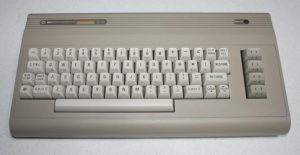 This entry was posted in Auctions and buying, My Collection and tagged Commodore 64, Joysticks. Bookmark the permalink.