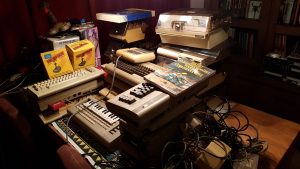 In October an add was placed on Marktplaats, for sale 10 commodores, no pictures or anything. Seller was from Boxtel. I gave him call about what he was expecting for pricing. I offered 200 euro and explained that a working Commodore, old model probably would cost 20-35 euro. Because i was very enthusiastic about collecting, he agreed on the sales. So, after work, in terrible weather and traffic i drove to hist plae. Elder guy and his girlfriend, nice people. They still had everything stored in the attic and  over the years he bought Commodores at garage sales…and he couldn’t tell me if things were working or not. In the past weeks they cleared most of the attic, as he told me it’s was absolutely stuffed there with junk which  they sold…except for the Commodores and some Atari stuff. Nice conversation with the guy and his girlfriend though.

Amazing how much dirt and dust can cumulate over the past decades…..There were indeed 10 commodores, spread in every corner of the attic. Boxes with diskdrives, disks, printers, joysticks etc. Well, amazing in a sort of way….I think my car was absolutely packed. And after so many years of storage it was smelly, due to smoking, dust etc. Everywhere in my car there were boxes. It just pilled up at my house in the living room. I cleaned immediately most direct of it, and threw away all bags and cardboard boxes.

Anyway, nice conversations. And I guess, a good deal, besides the stack of Commodores in need of repairing…..and sometimes…i still can smell what items came from there..

This entry was posted in Auctions and buying, My Collection and tagged Cartridges, Commodore 64, Joysticks, Silver. Bookmark the permalink.