I go myself a Compucase 64d…symptoms..black screen and test cartridge showed ram issues and a failing PLA. Bummer. Powermonitor showed no current, and 5volt line far outside the tolerance…3.6volt is a bit low I guess. 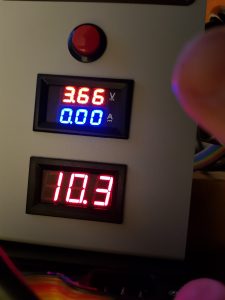 Opened the case today, fairly easy and simple. Removed the motherboard, connected it to known working power unit (with powersaver) and fired it up..with the test cartridge. Everything working fine!, removed the test cartridge, and my beloved C64 start screen showing no issues at all. Both 5volt and 9volt within tolerance (thanks to the powermonitor from bluebolt12, look for him on ebay.com.au). 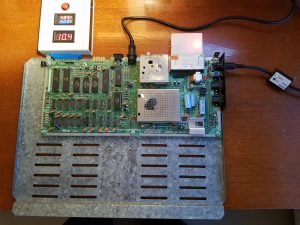 So….at least that means that there was no power failure at all, at least not with fried RAM and PLA as result!

Removed both 1541’s, one has a speedloader build in and a parallel cable. Will test both units tomorrow. 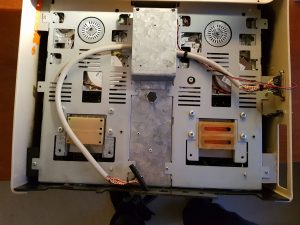 Then I connected the main board with powersaver back to the power unit of the Compucase….same problem again!. I removed the power cable of the unit…reconnect it again…and I got at least the Commodore screen again. With less ram…and slowly all kinds of characters appearing at random on the screen. Time to replace that cable…and voila…a working Compucase! Looks like something was wrong with that (longer) power cable, losing so much on the 5v line that the main board was failing. Seems like solved. Will do a longer test tomorrow.

This entry was posted in My Collection, Repairs and tagged Compucase 64d. Bookmark the permalink.