Went to harlingen yesterday to meet with Marvin. Nice guy, nice conversation about collecting childhood dreams. Impressive storage and workplace he’s got there with loads of retrocomputing stuff. Picked up my Compucase 64d and bought a powercartridge boxed (later edition).

Car loaded..needed to get some stuff for Patrick as well, monitor, c64 with speedloader, empty disk boxes, cartridges and a VIC1020. 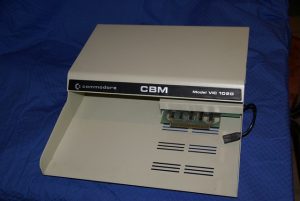 Turned on the Compucase 64d…black screen. #@)(#)@($ Test cartridge showed failed RAM and at least the PLA. So….probably the powersupply fried the board. Investigate later this weekend….

This entry was posted in Auctions and buying, My Collection and tagged Compucase 64d. Bookmark the permalink.