In the last months i bought some sets of Commodore stuff which both contained, to my surprise,  a silver label with a KU board. One of them was working except the SID (and had a rainbow label, probably due to an RMA repair with the power connector). In both cases i had my car loaded with boxes with stuff and paid about 180 euro for each load.

Both are registered at the c64 preservation project now. 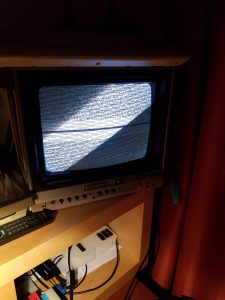 The first silver was not working and showed the following screen, first i thought this might be a VIC issue or the clock generator, but comparison with screen shots from The Pictorial C64 Fault Guide did make it looks like a leaking capacitor problem.

I asked for some feedback on Facebook and it seems that these KU boards quit often have leaky capacitors, especially C107 en C108 near the VIC. So i needed to remove the cover of the shielding box where the VIC is located…to find out that some capacitor is soldered against it 🙁 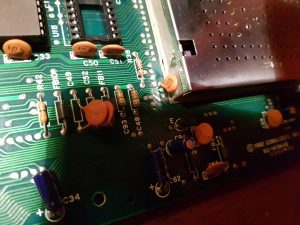 I checked with the other KU board, to find out there was not capacitor at that location. Seems that i’ve got a REV.A and a REV.B board…which is kinda cool, if it’s important to you 😉 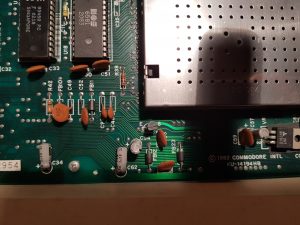 Now i’m quit afraid what i will find after opening it. Will desolder that cap this evening, remove the box. Check C107 and C108, remove them…clean up and i dearly hope no damage is done beneath  the capacitors. Second I need to do some continuity tests on all traces beneath there…or even repair them. Solder in some new caps (get them today)…and fire it up again. Hopefully that’s the only issue with this board. Oh…and i should not forget to solder back the capacitor which was connected to the shield!

This entry was posted in My Collection, Repairs and tagged Commodore 64, KU-14194HB. Bookmark the permalink.